WEBINAR RECORDING
*For easier viewing, the fullscreen button is available at the bottom-right corner of the video.

Governance is never easy and failure to address critical governance attributes can cripple many complex projects.

There is a tendency to underestimate the level of effort required to shape governance arrangements to enable a probability of success and minimisation of harm when overseeing complex projects. Large organisations have standing governance structures that mirror good corporate oversight models which routinely deliver effective decisions. As in many other aspects of launching and executing complex endeavours, there is reluctance to deviate from what has traditionally worked well.

Observation has indicated that governance is one of the critical enabling factors to navigating complex projects and that there are a number of important attributes worthy of pursuit.

The aim of this webinar is to present perspectives on important governance model elements when addressing complex projects that, while common sense, are easily dismissed as no different from existing organisational oversight. They are presented as a set of expectations that should be embraced as priorities because while most are not unique to complex projects, they are on occasion critical to achieving better outcomes in complexity. 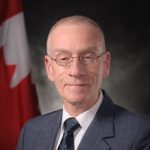 Ian Mack retired from the Canadian Armed Forces in 2007 as a Rear-Admiral of the Royal Canadian Navy after 38 years in uniform. As a Public Servant, he served as a Director-General for Major Project Delivery for a decade with a portfolio of complex weapon system platform acquisitions for the Royal Canadian Navy and the Canadian Army. As well, he was both a plank holder at launch in 2008 and subsequently shepherded Canada’s National Shipbuilding Strategy for 5 years.

After retiring from the Public Service, he established a small consulting activity, which subsequently had him advising internationally on complex project and program execution and governance. He also has teamed with Strategic Relationships Solutions to assist organisations build towards sustained collaboration as a foundation for complying with ISO 44001 – this work adding to his perspectives on governance.

Ian is a Fellow of the International Centre for Complex Project Management, the World Commercial and Contracting Association and of the Canadian Global Affairs Institute.